Skip to content
Anyone who knows me knows that I am NOT a runner. I never have been. It’s actually become sort of a running (pun intended) joke with my family and friends.
.
.
To the point where it wasn’t funny anymore.
.
.
I’ve always admired people who can run marathons, and every year I’ve told myself that I’m going to learn how to run. I’ve never followed through with that resolution….until now!
.
.
Let’s backtrack for a second so I can explain why I don’t run. It’s not just because I hate running (which I still do, even after running a race).
.
.
I honestly don’t remember ever having to run. I played a few seasons of soccer when I was in elementary school but aside from that, I never had to run. I grew up doing ballet and modern and jazz dance, where running wasn’t a requirement. I don’t even remember ever running a mile in gym class….either I blocked it out or made up some excuse to get out of doing it (both are possible). As a senior in high school, I suffered an overuse knee injury from dance, which made even brisk walking tough. Throughout college I tried to get into running but it was always a one and done type of thing. My knee would hurt to much, or I would get too out of breath, or too sweaty and I would give up after one try. The breath and cardio was the real issue, not my leg strength. I always started breathing hard within minutes and then would end up with a horrible stitch in my side and just stop running.
.
.
Then I found powerlifting, another athletic activity that doesn’t require running. I stopped trying to run and focused on getting stronger and improving my lifts. And that’s where I was about 6 months ago when I decided I wanted to try running again.
.
.
This time, I was inspired by my cousin Lisa, who ran the Boston Marathon this past year. She’s an avid runner, and seeing how much fun she has doing races made me want to do one too. I started doing short, interval runs on the treadmill but I never really ran for more than 2 minutes at a time. And then slowly….I stopped running again.
.

.
.
Fast forward to August, when I was sitting on the porch of my aunt and uncle’s Cape house in Chatham. Lisa was telling everyone about her plans to do more marathons in other cities. I  jokingly asked her if she had any 5ks coming up. She did. She was doing one on October 1 in Kendall Square. I thought about it for a moment, then said, “ok, I’ll sign up and do it with you”. Immediately, people started laughing. “YOU’RE going to run a 5K?!” ” There’s no way you’re going to do this” “I’ll believe it when I see it!”……these comments lit a fire under my ass. Now I had something to prove….and I was GOING to do it.
.
.
I also faced backlash for training for the 5k. People kept telling me I didn’t have to train since it was only 3 miles. Reminder: I’ve never even run a mile before! There was no way I was going into this without serious training. I thought it was a little disrespectful that I was getting made fun of for wanting to do it right and be safe about it. That would be like me telling someone to sign up for a powerlifting competition without any training whatsoever.
.
.
I decided to do my own version of Couch to 5k. I only had 6 weeks before the race, so I couldn’t do the entire 10-week Couch to 5k protocol. Here’s my exact training plan that I wrote for myself and followed:
.
Week 1, Day 1: 5 min walk, 2 min run, repeat 5 times
Week 1, Day 2: 5 min walk, 2 min run, repeat 5 times
Week 1, Day 3: 5 min walk, 3 min run, repeat 5 times
.
Week 2, Day 1: 5 min walk, 5 min run, repeat 3 times
Week 2, Day 2: 5 min walk, 6 min run, repeat 3 times
Week 2, Day 3: 5 min walk, 8 min run, repeat 3 times
.
Week 3, Day 1: 5 min walk, 10 min run, repeat 2 times
Week 3, Day 2: 1 mile run, which took 12 min
.
Week 4, Day 1: 1 mile run, 10 min walk, 1 mile run
Week 4, Day 2: 2 mile run, which took 25 min
.
Week 5, Day 1: 5 min walk, 10 min run, repeat 3 times
Week 5, Day 1: 2 mile run at Castle Island, took 29 min
.
Week 6, Day 1: 5 min walk, 5 min run, repeat 3 times
Week 6, Day 2: RACE DAY
.
.
For the entirety of this training, I was on the treadmill, except for my run at Castle Island in week 5 and the actual race. This was also the first time I had ever run outside. There’s definitely a huge difference! I should also note that the first time I ever ran more than 2 miles was on race day. So I hit 2 major milestones on October 1: running a 5k, and running more than 2 miles!
.
.
So as you can see I started pretty slow and easy, but I increased my running time rapidly. I basically skipped around certain days and weeks of the actual Couch to 5k program. Once my runs started getting longer, I could only run twice a week because I wasn’t recovering as fast. My knee actually felt pretty good throughout the 6 weeks of training. I attribute this to the fact that now I know how to take care of it to prevent that nagging knee pain.
.
.
Oh, also, I was still doing my regular powerlifting workouts in addition to this! I had to back off weight, especially with squats, but other than that it was business as usual.
.
.
I had 2 goals for the race:
1) Finish
2) Run the entire time
.
.
Well, I finished in 35:13, which was actually faster than I expected. I was expecting to finish in around 45 minutes, so I was happy with that time. However, I did stop to walk, about 1.3 miles in. I think I got too excited and started off way too fast, because that first 1.3 miles I felt like absolute shit. I actually stopped to walk because I thought I was going to throw up! I didn’t-the feeling passed after I burped a few times and had some water. Once I started running again, I felt great for the last 1.5 miles. My knee started killing me at around 2.5 miles, and continued to hurt for 3 days. I saw my chiropractor on Tuesday this week, and she did Graston on my quad, patellar tendon, and IT band. I felt a lot better after that, but Thursday this week was the first day I woke up with no knee pain at all.
.
.
So here’s the thing. I have yet to experience feeling good after I run. I always feel like shit. I’m always exhausted. And I bloat like CRAZY after running! Still searching for an answer as to why this happens, if anyone knows! Anyways….I did not feel great after the race. I was happy that I did it, but my body hurt, I had a stomachache, and it took almost an hour for my breathing to go back to normal. One thing I will never do again after a race is drink alcohol. I felt like shit all day after 2 hard ciders at the race after party.
.
.
So, while overall it was a positive experience, I don’t think I’ll be running a marathon anytime soon. I’d run a 5k again. I might even do a 10k eventually. It was a fun, positive experience and I’m glad I had a great group of people to celebrate with after (I couldn’t keep up with anyone LOLZ). I wish I hadn’t jumped the gun and started too fast, and I wish I hadn’t stopped to walk, but I am going to learn from this experience and hopefully not make the same mistakes next time.
.

.
I’m planning on running once a week now. My powerlifting training has taken a backseat for the past 6 weeks, but I’m going back to focusing on that. I’d rather load up a heavy barbell than run every day of the week and twice on Sundays. But now that I know I can run….who knows?
.
.
Also, shoutout to my amazing boyfriend Tim for not only supporting me through tears and aches and pains and complaining, but also for signing up last minute and doing the race with me, AND waiting for me at the finish line (only a little mad at you for taking off without me 🙂 )
. 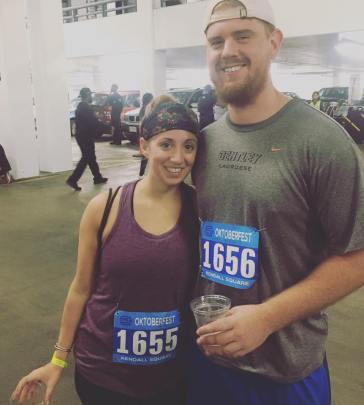